The Unbearable Lightness of Being Digital

As a creative who began his days at a time when the agency still had a bromide room to set physical ads, I’ll admit it took a while for me to see real value and permanency in things “digital”. But a shift below the line in the late 90s and an increasing focus on digital channels (ie eDMs and display ads), soon saw me spending a lot of time reviewing and fine-tuning banners and buttons of all shapes and sizes. And because craft was important, my art director and I often spent an inordinate amount of time “pixel pushing” – sitting on the shoulder of the poor banner builder whose job it was to turn our creative masterpiece into all those wonderfully named resizes. Skyscrapers! Leaderboards! And (erm), buttons … We optimised animations and framing to ensure each iteration was as impactful as it could be in order to hit those targets! (Which based on today's benchmarks would be a whopping 5 clicks for every 10,000 impressions.)

Lotsa effort for not a lot of return, right?

The flipside to this was the offshoring approach many agencies adopted that saw studios popping up throughout S-E Asia to turn around resizes faster than you could type a debrief. But inevitably, this need for speed led to compromises in quality – a perfect illustration of the fast/cheap/good project management trichotomy.

Was this a better reflection of digital’s true value though? Churn it out, get it up, and keep costs down. After all, if a banner is displayed and no one clicks on it, does it still make an impression?

The value of the intangible

A few weeks back however, my attention was drawn to this headline: “Anonymous buyer pays $69m for a jpeg,” soon followed by a smattering of art friends on Facebook and Insta talking about NFTs and whether they were worth exploring. With no idea what a “non-fungible token” was, or who in the hell Beeple was when he’s at home, I decided to do some research.

Turns out NFTs having to do with NFC, while Beeple is the proverbial mild-mannered Wisconsin father of two, Mike Winkelmann, who clearly has quite the vivid imagination. (Worth noting – this Esquire profile was released a few weeks prior to the record-shattering Christie’s auction that led to the above headline. Definitely recommended reading given what ensued.)

The Beeple auction story is significant for many reasons – not least of which is the fact that the result places it as the third highest auction price ever achieved for a living artist, behind David Hockney and Jeff Koons. But for the purposes of this story, let’s focus on two things – what was sold and who bought it. 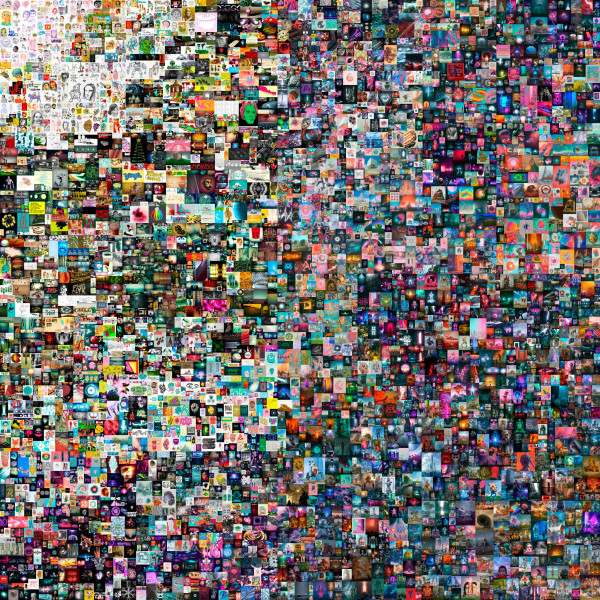 Firstly, the artwork, “Everydays: The First 5000 Days” was a collage of all the images Winkel – sorry Beeple – had released via his @beeple_crap Instagram. Interestingly, Beeple has previously chosen to release many of his projects as either open source, or free to use under Creative Commons. Looking at his website he doesn’t even want credit. This all presents an interesting tension between the seemingly “disposable” nature of what he’s creating, and the value now being imposed on it by others.

Speaking of those others – the buyer, an anonymous digital asset investor who goes by the handle Metakovan, is reported to be the chief financier of a crypto-based fund, Metapurse, that acquires NFTs and other virtual properties (perhaps some nice condos on Second Life?). He (?) had already purchased 20 Beeples in an earlier auction (for $2.2m), which were then fractionalised, and now, perhaps thanks to the recent purchase, have a market cap of $230m.

Putting the fact that individuals are using a virtual currency to purchase ethereal artworks to one side, this sequence of events got me thinking about the value and attention we place on our digital activities, particularly as marketers.

Impacting those who matter

In my other life, I have the honour of being a Board member for Sculpture by the Sea, the world’s largest free to the public open-air sculpture exhibition. Through this I’ve met a great many artists, many of whom create massive totems to permanence; sculptures made out of cortile steel, concrete and bronze, often selling for high five to six figure sums.

The most curious from amongst this group though, are the ephemeral artists. These artists often create site-specific, blink-and-you-miss-them works that degrade and disappear as the show goes on. I’ve even watched one artist painstakingly create a work out of sand, seeds and shells, knowing that the first big breeze or errant foot would scatter it to oblivion.

And unlike Mr Winkelmann’s jpegs, there’s still no way to sell them.

I’ve often wondered what drives these artists to create the works they do; putting as much focus and effort in the placement of a seed, as another sculptor does in bending plate steel. Perhaps the answer can shed some light on this digital discussion.

We know in marketing that work has true impact when it reaches the audience for which it’s intended, when they’re looking for it. And it can often fail when it becomes lost in the sea of other messages around it. These ephemeral works are much the same. It’s hard to know or measure the value of the effort until we see how somebody responds to it. That’s why we test, and learn, and optimise. And why it takes time and effort (and budget), to do good digital properly.

But perhaps it’s also ok for digital advertising to be ephemeral too – not all of it must equal a click, or a response or a sale attribution. The digital realm can be powerful for building brands and telling stories, and doesn’t need to be boxed in as merely a short-term, direct response channel. If we free it from its quantifiable shackles and use it in line with a brand’s needs and desired outcomes, it may ultimately be a little less misunderstood, and even more effective.