It was the arvo before Australia Day.

The office was crackling with excitement at the much deserved opportunity to down tools early and enjoy an afternoon of Australiana – food, fun and games in the park to celebrate this beautiful sun-kissed country we call home.

THE TIME HAD COME
Once the last dedicated, hard working Affinity team member had finally been peeled away from their computer screen there was only one 180 million dollar phrase to be heard around Affinity HQ: ‘Sun, where the bloody hell are ya?’.

After a morning of relentless rays, the weather had taken a turn for the worst, so the Affinity crew had to do what we do best: adapt.
All things considered, our office picnic wasn’t so bad after all – in fact, as it turns out, most of our planned Aussie Day activities still went ahead…well, kind of.

IT'S ALL FUN AND GAMES UNTIL...
A spontaneous game of office-indoor-backyard-cricket with scrunched up paper and umbrellas as weapons of choice was soon put to bed after a quick six looked destined to end in tears.

The low key game of Frisbee that followed more than satisfied our playful appetite, while the tip-top spread of nosh which included lamingtons, fairy bread, ANZAC biscuits and Tim Tams capped off another fantastic pre-Australia Day afternoon amongst colleagues and friends. 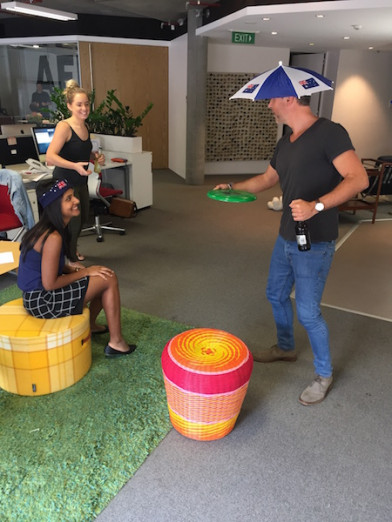 Drop us a message