Perhaps the biggest news in the advertising landscape in Australia (aside from Covid) has been the ACCC release of a News Media Bargaining Code. Little has been written on the subject since the draft code was actually published, so I thought it was worth putting my thoughts down.

If you’ve been out of the loop – or off the grid – the code essentially requires Google and Facebook to pay for news media content that gets used on their respective platforms.

The draft code release prompted an incendiary, misleading and heavily promoted open letter to all Australians from Google. Their letter implied that the law would see consumers having to pay for what are currently free services by Google.

Now it should be noted that the misleading part actually came from the ACCC’s commentary, but in my opinion the letter was some of the best propaganda I’ve seen in a long time. The highlights over at risk, search and hurting are a genius Orwellian touch. Take a look at it here. 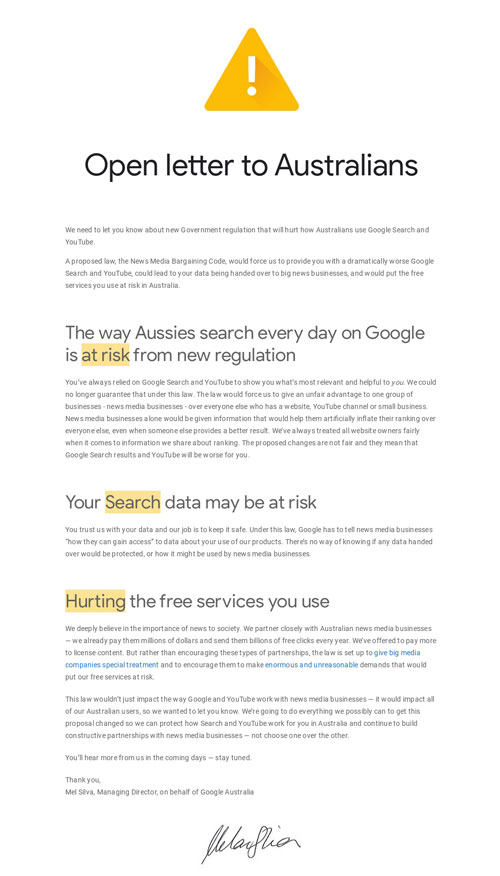 But despite all the noise from Google, you only have to look at their own search data to see that Australians quickly lost interest. Then Facebook tagged into the fight … 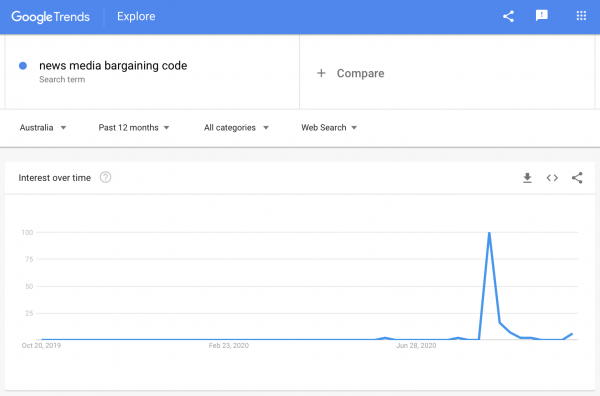 Facebook upped the ante by threatening to disallow all links from Australian news media on the platform, essentially removing billions of inbound clicks to news sites across the country.

And while the tone of both responses was quite out of step with their usual public image, it’s fair to say that there’s a lot at stake, and the world is watching. Should the code be put into law, it would have wide ranging implications for years to come, not just locally but globally.

But there’s a long way to go. When similar legislation was introduced in other countries aimed only at Google it didn’t go well. Google worked loopholes, stalled negotiations and ultimately shuttered their Google News service to avoid payment to publishers (take a look at their activity in Spain to get around EU laws as a prime example). The threat, either explicit or implied, for a publisher to have their content “delisted” from either of these platforms is a serious threat to the publisher’s digital advertising businesses and their business model.

It’s this implied threat and potential abuse of market power by Google and Facebook that’s been enough to get the Australian Competition & Consumer Commission involved.

But as Mumbrella’s Tim Burrowes put it, “This is not, by the way, one of those debates where there are goodies and baddies. Here, everyone is a bit grubby.”

So, what’s it all about?

To start, it’s worth recapping what the news media and digital platforms mandatory bargaining code actually is? To ensure accuracy, we’ve used the ACCC’s wording below:

On 20 April 2020, the Australian Government asked the ACCC to develop a mandatory code of conduct to address the bargaining power imbalance between Australian news media businesses and digital platforms, specifically Google and Facebook. The ACCC released a draft code for public consultation on 31 July 2020. The draft code would allow news media businesses to bargain individually or collectively with Google and Facebook over payment for the inclusion of news on their services.

So far so good.

The government was right to engage the ACCC in their role as a competition watch dog that looks into abuse of market power. If you doubt this, you can see the very real need for their involvement from both Google’s response and Facebook’s ‘toys-out-of-pram’ threat to damage news media.

But in fairness to both of these organisations, their responses were provoked by a draft code that clearly had undue influence from Big Media (ie News Limited and Nine).

The current draft is so one-sided it’s not hard to wonder how such a clumsy, cynical unworkable draft code was ever published. This is still a draft and hopefully reason prevails before it’s enacted into law. Indeed it wouldn’t be surprising if this was all part of the tactics by the ACCC to bring both Facebook and Google (reluctantly) to the negotiating table, unlike the EU experience.

Why is the draft code unworkable?

From an initial read of the draft code there are four major areas that are unworkable even from the ‘minimum standards’. These minimum standards must apply irrespective of a binding payment agreement. The digital platforms are to provide news media with:

1. Algorithm notice: 28 days notice must be given on any algorithm changes that will affect referral traffic.

AFFINITY’s perspective: This is a ridiculous requirement. Google alone reportedly averages thousands of algorithm updates per year. To give 28 days notice on each one is overly onerous. It’s also not commercial or fair. Why should Australian News Media be the only ones in the world that are alerted to changes, and effectively know how to game an increase in rank? That said, some form of reactive measure may be appropriate to ensure Google doesn’t intentionally target a news organisation, or unfairly target anyone else they happen to take issue with.

2. User data: Clear information about the nature and availability of user data collected through users’ interactions with news on their services

AFFINITY's perspective: The clause requiring digital platforms clear information about the nature and availability of user data is unclear and ill-defined and likely lead to disputes in its current form.

AFFINITY’s perspective: The moderation and opt out requirements are particularly onerous. In more detail, Google and Facebook must provide, as a minimum standard, the ability to:

The engineering solution in meeting this is huge, costly, time consuming and honestly, unworkable.

Having said that, what’s more concerning is that it has the potential to enable our News Media sector to have censorship powers. Which editor or media baron would you trust to censor the internet? James Murdoch just left News Corp because, “a contest of ideas shouldn’t be used to legitimise disinformation.”

We wouldn’t trust our government with this censorship power, and thankfully we don’t live in China with their great firewall. Why would we trust the Murdochs et al?

If agreement can’t be reached after a standard procedural negotiation (3 months) and mediation process (15 business days), an arbitrator gets appointed by ACMA (Australian Communications and Media Authority). The arbitrator then gets 30 days to choose which offer they will accept: the media owners or the digital behemoths.

That said, the terms of reference are clearly stacked in News Media (or rather Big Media’s favour). The draft code requires that in deciding between the two parties’ final offers, the arbitrator must consider:

This instructs the arbitrator to consider only the value and the cost that News Media organisations bring to the digital platforms NOT any value these platforms provide to News Media. Google claim they deliver around AUD200 million worth of clicks for free to News Media annually. For this to be excluded from consideration makes this a foregone conclusion on which offer will be accepted.

What’s it all worth anyway?

These are already staggering sums, but once you add in potential global ramifications it becomes truly mind boggling.

To put this into perspective, Google’s Australian operations accounted for just 0.6% of Google’s total revenue in 2019. Google made USD$34 billion in profit in 2019 according to their annual report. As an equal proportion, the maximum profit Google could have made in Australia would have been AUD$265 million. And whilst this is far higher than their ATO declared AUD$40 million, News Corp is essentially asking Google to pay more than double the maximum profit Google could make in Australia annually. Seems fair, right?

In response, Google Australia CEO, Mel Silva has stated the business generates around $10 million in revenue in relation to news media, but also provides about $200 million of value to news publishers. Google sometimes refers to this as the database of intent. It makes money by helping people find things, but it makes exponentially more for things of high value like a car or home loan. In this context it makes sense that they derive minimal direct revenue from news.

However, Facebook might find it difficult to argue that news content generates as little revenue for them. News content drives engagement and outrage on the platform, as the recent Netflix documentary The Social Dilemma captured all too vividly.

It should also be noted that both Google and Facebook can potentially derive intent from the news content accessed by their users, a value that needs to be considered too.

Google has seen the writing on the wall and at the beginning of October announced a USD1 billion global program to pay publishers over 3 years.

Which brings us to why the digital platforms should even pay in the first place?

The industry seems split 50:50 on this, perhaps best summarised again by Mumbrella’s Tim Burrowes, “The idea that Facebook and Google should pay publishers for the right to send them traffic is downright weird.”

But it also prompts the question like why stop at just news? If this about copyright, why shouldn’t Google and Facebook be forced to pay other titles for the use of their content and the data signals that content produces? Why exclude the ABC and SBS from the revenue deals?

The fact is, there have been plenty of industries disrupted by the internet, but none with the reach of voters at 6pm nightly and in daily papers.

While much commentary (ironically on Social Media) can be placed under the catch-all of Tax the Bastards! This is not about a tax. It’s more akin to a government-mandated, sponsored bail out of an industry. And just three companies will reap the majority of its benefit: News Limited, Nine and Seven West Media.

At AFFINITY, we’ve been divided on the issue too. However, Google’s decision to release an update to their open letter, where they stated they weren’t opposed to the code if made more workable, effectively undercut the opposition to this law in our office.