Hottest 100 and the Illusion of Choice

Guardianship of AFFINITY’s ‘cool’ vibe invariably falls to a few of us millennials. And we’ve been blasting Triple J so hard that the Gen Xers are falling in love with the station, some of them all over again.

With this year’s Triple J’s Hottest 100 Countdown attracting a record breaking 2,386,133 public votes, we decided to take a look at the UX and data behind the nation’s most eagerly anticipated countdown.

“Track Me Baby – One More Time”

The Triple J website contains a number of tools that encourage you to interact with Hottest 100 content, including sharability, commenting, liking, or simply hosting a party. But as trending songs are shared and content is optimised, the user experience changes. As hype pushes top trending content up the ranks, the viewers are almost forced to understand and act on the content for which they are served – a simple cognitive bias.

Websites like Bean Counter and Warmest 100 have been applying algorithms and data experiments in an effort to predict the Hottest 100 for years. And simply scanning Twitter posts or Hashtags for trending songs landed a successful forecast of 92 of the Top 100 songs in 2013.

Didn’t feel mesmerised by more than eight songs in 2017? Triple J were there to help a sister out with the last two votes. Adopting Google SEO, the station offered guidance for nominating tracks, by recommending listeners select the last song from their ‘Favourite Artists Top 10’ or ‘Feature Albums from 2017’.

A little biased perhaps? Not only does this method of voting provide an upper hand to those that are advertised or endorsed by the station, it ironically goes against the spirit of Triple J’s own stand against campaigns to push one song to the top of the charts.  #Tay4Hottest100 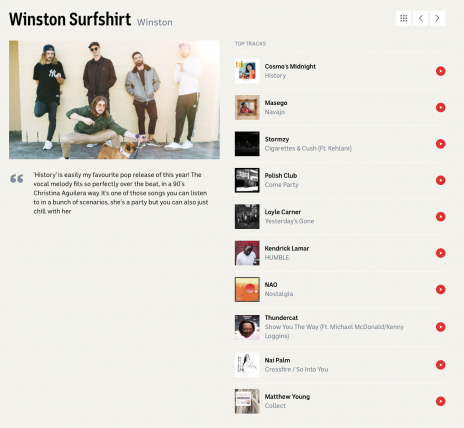 Winston Surfshirt – a regular feature in the AFFINITY office, votes for their Top 10.

Picking up on this form of voting bias was LaTrobe University, who applied econometric modelling to the Hottest 100. The study identified advantageous factors that influence the listener both consciously and unconsciously, including artist tours, the alphabetical ordering of songs and timing of release.

Conducting my own personal cross-variation test, I set out to see if my tracks were chosen freely or were unduly manipulated by other forces (a task that you can also do yourself). Interestingly, results proved that 40% of my votes were due to the nostalgia and fuzzy festival vibes that give live music and artist tours the benefit in the voting process.

It’s true! Recent live gigs, such as the yearly Byron Bay Falls Festival and weekly gigs at Unibar had enhanced my attraction to the artists and the music I was listening to.

So, although we’re always conscious of user bias and not leaving things to chance, something as personal as music taste is difficult to predict. Whether it’s tracking hashtags or the influence of artist tours, algorithms won’t be able to predict outcomes to 100% accuracy, they’re much more on the money than your guess or mine!

But we can still guess.

It’s all part of the fun.