The Effies have long been an important awards for the AFFINITY team. They represent everything we value in work that delivers measurable outcomes. And this year, one of our Bright Sparks, senior strategist Caspar Yuill, had his first opportunity to cast a critical eye over the round one entries. Following are some of his observations.

Not only was this year my first time judging the Effies, it was also going to be a first look at how the radical social and cultural changes brought on by the pandemic (and other events) were going to be reflected in the work vying for recognition. Here are four things I took away from the experience about advertising effectiveness:

The Medium Is The Message

Canadian communication theorist, Marshall McLuhan, coined this (now much-butchered) phrase back in 1964. He meant that not only does the medium by which a message is communicated impact on us, but also that the message can distract us from how the medium subtly alters the world around us. McLuhan often used the example of the lightbulb. In itself a message-less medium, but one that reshaped society by allowing light to be summoned instantly. Different types of social gatherings started to flourish, and we got to stay up a lot later!

During the judging I came across several case studies that considered how the medium impacted the message and re-shaped behaviour. These entries considered packaging, digital touchpoints, and one very, very creative use of something we use every day. I can't say much more for now (if I want to be invited back next year), but while the media used may have varied, the important thing for the case study was always how the medium itself facilitated the behaviour change.

One thing missing from this year’s Effies entries was mention of new marketing technology (like CDPs, 1-1 personalisation at scale, or any other headline-grabbing new kit). Instead, the best papers had solid strategies backed by insightful research. And most used clever creative and mixes of media to demonstrate this. Now we’re never ones to underplay new tech, and a serious amount of it certainly underpinned some of these campaigns, but the most successful entries got the balance just right: technology as an enabler FOR a strategy, not a strategy itself.

At AFFINITY, we talk a great deal about the difference between goals and outcomes. The simple difference is that goals tend to be more short-term and campaign-based, but should contribute to broader business outcomes. In an awards show like the Effies it’s reasonable to expect to see mention of both, but what was particularly interesting in the entries I judged, was seeing what type of goals were ultimately making the biggest impact.

My observation was that many of the bigger budget campaigns with media dollars splashed across traditional ATL channels, tended to focus on more traditional campaign goals – sales, awareness etc. And while they achieved significant results, the more interesting approaches came from smaller campaigns that drove big results on relatively meager budgets. The difference was in one of the critical goals they shared – fame.

Campaigns that aimed to create talkability and recognition for a brand often had excellent results for brand perception and sales. It's nice to see some practical examples of the findings of Binet and Field; that campaigns looking to drive fame drive more business results than non-fame-driving campaigns. This suggests that when setting goals for your next campaign, fame should be one of those goals. 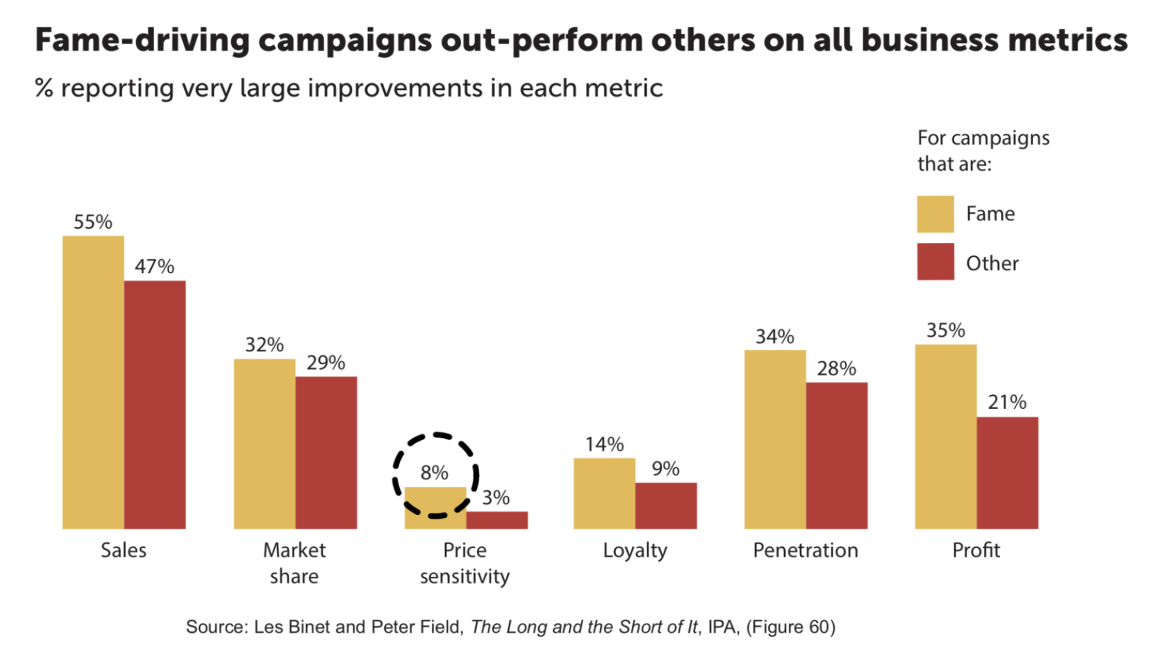 How to Prove Outcomes Beyond Doubt

Proving outcomes is always the most difficult part, especially in the Effies. If the work doesn't work, you lose the lion's share of the marks. Failing to rule out other factors for the results is also a critical part of proving outcomes, and this was especially important in the tumultuous year that was 2020, when categories like home appliances saw record growth.

One of the best ways to show that the activity worked is to compare the brand's results to the category and competition. If your results went up, but the whole category also did, then too bad, that's a low mark for the outcomes section. However, if your brand went up when the rest of the category declined, that's excellent proof for an advertising effect.

Of course, not all brands can afford brand tracking, so some papers showed a lot of creativity in using other data sources to prove their case, like increases in Google Search interest. Cleverness in research and measurement was a hallmark of stand-out papers.

The other important part of proving outcomes was to not only show excellent commercial results, but also convincingly rule out all other effects that might have impacted them. The best entries played devil's advocate for their results and even removed increases in sales for some products that didn’t have a convincing link. It was clear who had put real effort into presenting the strongest case possible.

It goes without saying it was a real privilege to judge the first round of the Effies. The sample of work I saw had some true excellence in there, and despite the continued tumultuousness of 2021 (we just can't catch a break, can we?), I'm sure next year will also have some outstanding and inspiring work.