We all care about our privacy these days, but sadly it’s often a case of the best of intentions, but no real action.

According to the OAIC Australian Community Attitudes survey (2017) most of us care about our personal information being shared online, and this concern is growing. Yet few of us bother to take any real steps to safeguard this privacy. This is a behavioural concept known for almost two decades as the privacy paradox: the discrepancy between stated intent to disclose and actual disclosure behaviour.

So the research team decided to do a quick investigation of our own, but with a slight twist. We conducted a short survey to a pool of 650 Australians, asking everyone:

How concerned are you about your data privacy in general? (on a scale of 0 to 10 – 0 being not at all concerned; 10 being extremely concerned)

And what did we discover? Well yes, in line with the Federal Government Study, we are indeed concerned about our privacy – with 93% stating a number between 4 and 10.

Then half the sample were shown a list of actions and asked which they had undertaken as a result of this concern:

Sample A. What, if anything, have you done as a result of this concern? Select all that apply.

While the other half were asked the action questions upfront:

Sample B. Which of the following, if any, have you done about privacy? Select all that apply.

And lo and behold, if we first asked your level of concern, and then what you had done as a result of this concern, you were significantly more likely to claim having taken action. An effect of audience priming*. As humans we often feel compelled to overstate our actions – especially on the easy: I really should be doing this by now stuff, given how important we claim it is!

But the reality is, we are consistently not doing the hard stuff. Anything that takes more than a few seconds falls by the wayside, no matter the risk/benefit. 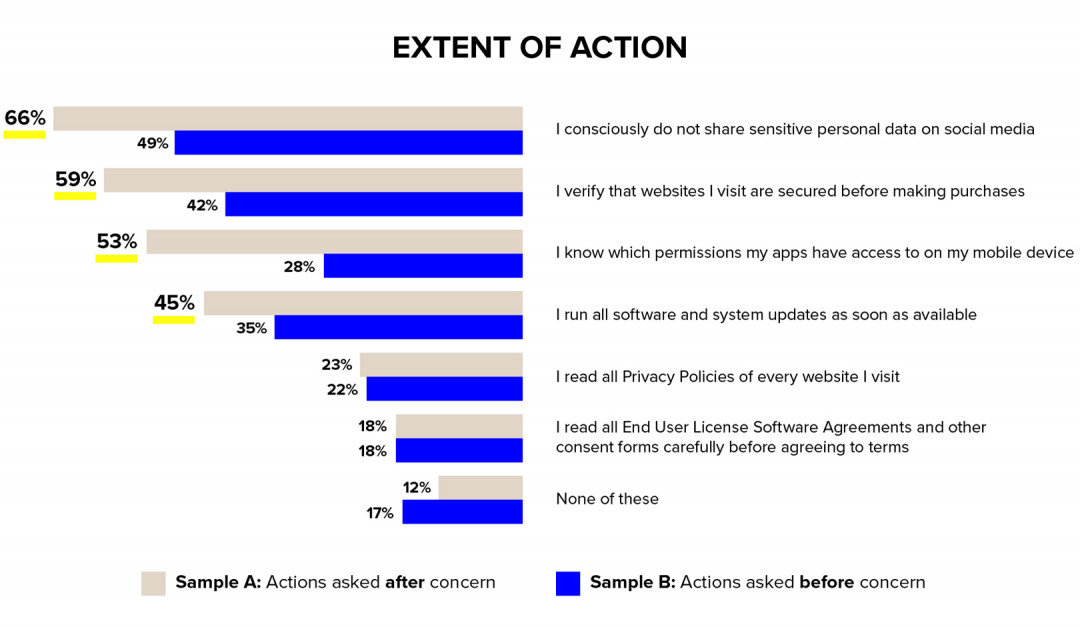 *Priming : A subconscious phenomenon whereby exposure to one stimulus influences a response to a subsequent stimulus

We’re not going to end this piece by telling you what you should be doing, how to do it, or even why you’re not doing it – you can do some further reading on all those points here if you wish.

But if you want to know more about this study, our use of Behavioural Science, or our Research offering in general, give us a call on 02 8354 4400 or email hello@affinity.ad

This blog post was inspired by this article from July 2020