There's a mildly popular reality TV Show called 'The Amazing Race' where teams of two run around like mad completing crazy tasks in the slim hope of winning a million dollars.

Don’t be fooled. This (inaugural) Affinity Social Club event is nothing like that show. For starters, no cameras were allowed (except on smartphones) and the ultimate prize was much more sweeter than a handful of money: bragging rights.
That’s right, high fives and humiliation were up for grabs and the only hint was to wear clothes we wouldn’t mind sweating in. Was it another escape room? Laser tag? A sporting event where Australia actually beats New Zealand?

It was The Affinity Chase, a riddle-based scavenger hunt set in Sydney.
Everyone was paired with someone they don’t normally sit next to, given a sheet of challenges, and told they had to be back before 5pm with photographic evidence of having solved the riddles. This was team bonding with a twist! The first team to make it back won. 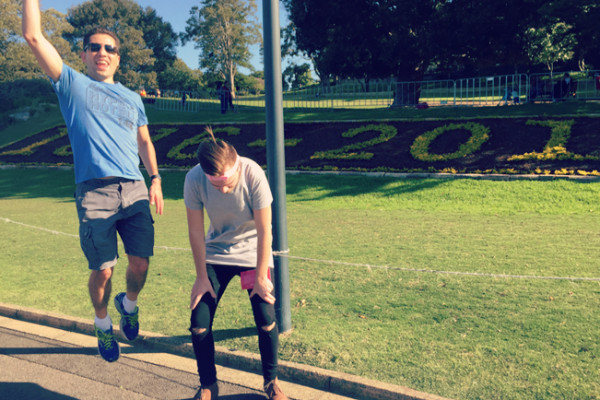 We’re located near the middle of the city so we figured that’s where most of the riddles could be answered, and headed straight there. After putting some distance between our office and us, we paused to catch our collective breath and to read our riddle sheet.

The riddles were tough. One mentioned fat ladies singing, so we sprinted off to Sydney Opera House to get a photo with some strangers new friends. We got our proof and cracked some of the other riddles.
Our quest led us to landmarks like Customs House (for a bird’s-eye view of the city), the Museum of Contemporary Art (to appreciate imagination), and Hyde Park (to see the new 'Yininmadyemi – Thou didst let fall' sculptural artwork near the Anzac Memorial), so we kind of learnt something along the way too.

We had our selfies and jogged back to the office completely buggered – I checked my pedometer app: over 10,000 steps in 2.5hrs!
We were also last. The agency foyer was already packed with sweaty co-workers who not only beat us in the race, but also beat us to a celebratory beer (while juggling a sports drink in the other, of course).
So we gathered in the boardroom and presented our journeys to the other participants – re-enacting memorable moments like encounters with the other teams, the general public, and law enforcement officials the scenery.

Stay tuned for the next episode!