Staying on top is hard – especially in a saturated market. This is the crux of Apple’s move to embrace ad blocking on its Safari browser across iOS devices in June of last year. While the overwhelming analysis from industry columnists labelled Apple’s new stance a method of undermining Google’s search and display networks – a story for another day – Samsung recognised this as a pre-emptive strike in the battle for the best UX. Six months later, Samsung has opened up their stock Android backend to allow the same.

You have a smartphone. You struggle to think of anyone you know without a smartphone. This is the case the world over. With so few people yet to own a smartphone, virtually everyone only buys a phone to replace their old one every few years. As a result, the battle for market share intensifies and Tim Cook’s obsessive focus on “Android Switchers”  is clearly justified – that’s the key to staying on top. This dynamic is especially evident when looking at the performance of both brands at the release of each new model.

Along with a plateauing market, the capability of smartphones is plateauing – the cutting edge is getting dull and there’s less points of difference in an increasingly ‘samey’ market. Regardless of the innovative slowdown, users are still seeking a better experience so that’s the key to attracting them – just ask Jack Dorsey. As it gets harder to design new features, manufacturers need to find creative ways to improve UX.

As it so happens, 198 million people across the globe don’t like ads to the point that they use ad blockers – 41% more than the year before. User motives to install ad blockers are primarily UX-driven according to the Internet Advertising Bureau UK. 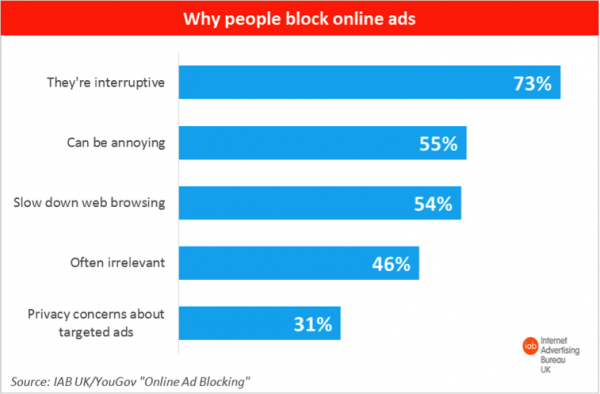 Currently, mobile ad blocking makes up just under 4,000,000 users or 2% of total ad blocking users. To put that into perspective that’s just 0.2% of mobile users. It may not sound like much but mobile accounts for 38% of internet users. Considering Apple’s Safari browser is used by 52% of mobile users, this acceptance of ad blocking has a strong potential to be a catalyst for adoption by users.

With an ad blocker installed, irrelevant ads that slow down browsing and interrupt content are no more. Apple saw this as the next step in improving UX and attracting more Android users to switch to Apple.

First off, we should see more manufacturers follow suit and enable ad blocking in their default browsers. For the time being, ad blocking could be a major UX development that cancels out any point of difference. If developers lean on ad blocking now they will be buying themselves time to work on the next gen’s shiny improvements.

The day to talk about Google’s search and display network involvement has arrived. Ad blocking app “Adblock Fast”, developed to work within Samsung’s mobile browser, has been removed from the Play Store for violating Google’s Developer Distribution Agreement.

This is an understandable move from Google given the potential for manufacturers developing Android OS smartphones to follow Samsung and damage Google’s primary source of income. Google has put its foot down and created a stalemate that any manufacturer on Android won’t be able to get around. It looks like Apple now has a defensible competitive advantage in UX.